I have to say, this is my first time to invent a card game for household playing, I got this idea while I was trying to write some articles about playing card games, a flash thought came to me, “why not create a new game self”. I think somehow human brain is way better than computer, when I was intentional to search ideas, I had thought some of related stuffs, they are sudoku, squares and comparing. So anyway, I got the final of sharp  of my new game, it is called three shared squares, sorry for  that game name, I am completely talentless at naming stuff, so just try being fine with it. But first of all, you should see how it looks like.

Four players, equal to double decks or more. Since its a version of holdem, so no jokers, but I won’t call it a poker game, I prefer it a card game because I am not gambler. 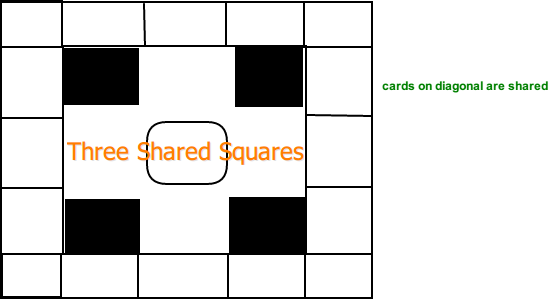 Totally 21 cards in the picture, 9 of them in catercorner.

I have to admit that is the most terrible picture I ever made, but it does have a way to show concept clearly with adding detailed introduction here. Three shared squares is a community card game, except for the layout, share the same rules of winning with Texas holdem. As you know, those holdem poker games always have shared cards on the middle of poker tables, and they are owned together by all the poker players around, but my new game is different from them about this, it too has community cards, however, they shall be shared in some levels.

Let me specialized the details and difference about the community cards in my own game. There are three levels of them from outside to inside, and they are all located on the diagonal of the playing layout. This’s the fun part of my game, all in the corners, that being said, you are not sharing all the public cards instead of the two cards at your sides.  In the exterior square, all public cards are faced up and known to all four players, but in the middle level, they should be faced down so only two players know that card value(yes, when deal this card, the two players check first and then put down on the board), and about the interior, only one public card and that is shared to all four participants.

These poker hands are same to Texas holdem poker hands, but with own scores:

This is a comparing game, whoever gets the largest poker hand win the battle, if two or more claim the same level of hands, then compare the numbers of cards, and if still stay put, then it is a tie(no suits are premium), all the losers should minus 30 from what they have. And also it is a scoring game, try to approach as many points as you can. By the way, you are free to set a beginning score value, say 1000.

When dealt, you should call your bet according to your current best hand. For example, you have two pairs, if you choose not to call any bets, at last you win, you will get 15 points. But if you keep conservative about future, you may want to call values that a lower than your current status, and that’s OK, that way if you lose this round, you will get a commutation of the gap between the hand points and your call points from minus 30, and what if you win with the lower call, you would just get your call points instead of your best hand points. Last situation is you raise your stake higher than what you get, that way if you win, you get the higher scores, but if you lose, you will get a punishment by minus the gap of hand points and call points and continue with the loser -30 rule.

That is a lot of crap misleading above, I should make a diagram clear it out. 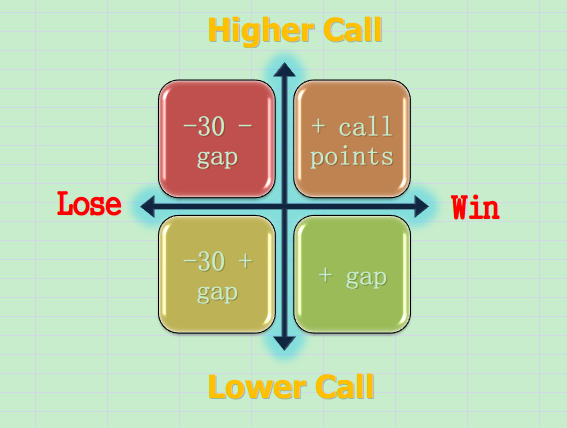 So how it be played? First deal the outside square, everybody gets three own cards, read and memorize them first then put them faced down to the table. Now every body antes or fold(give up this round), after finished this outside bet, continue to middle square and then bet again, in this case, you won’t get any hand cards again but 4 limited community cards, each card only shared by two players near by, and they all faced down(see the black square I drew in the first picture), in this turn, the cards dealt first and players bet later. Finally, before public the final universal community card, every body has the last chance to earn more wagers or blow up everything. When all the three squares are placed, all players get to the showdown and decide who laugh at last.

This is a quite lousy work of designing a card game, and it still in the construct because I am lack of 3 other people to test it. Nevertheless I am enjoying about the creation processing, maybe it is still not perfect or even totally unpracticed, but hey, give me a break, this is my first work after all. In future, if I get extra free time, I would think of making it much more effective and fair, and play it with my friends to hone it.

I know create a new great card game is not a piece of cake now, for I spent two days to think through the counting and dealing part, and probably I would not try to do another one again, so I would rather to share a whole list of self made card games here for whom would interest.

I am not sure about this card game whether it originates from China, but I did find it on Chinese websites whereas nothing on English websites, maybe it’s my negligence of search phrase, nevertheless it is called number off from direct translation from Chinese.

Number off is an easy and fun game, not complicated at all, all you should do already be told by the name of this game.

Prepare a standard deck of 52 cards, wipe off jokers(again? why us :-(.). Add decks if necessary. No limit numbers of players. Now deal all cards averagely to each player, if 52 can not be divided by the sum of participants, then fill free to roll with punches. All piles of cards in front of every player are faced down.

Play it anticlockwise, and it doesn’t matter who start the first card. Now come to the count off part, from A to 13 and circle again, that is to say every time start the game with numbering A and the starter deal a card faced up to the board, if the value of that card match his count, for example, he pronounce 10 and his card index is just right 10, then the player take all the cards on the pot. If not, keep rolling. This is a match game to avoid losing cards, versus throwing matches(draw the turtle) of which purpose is make all cards on hand to be got rid.

This time I use losing against winning. That predicates the first one run out of cards lost the game, and winner stay last. And I think maybe there is a possible that sometimes this game will take long time to decide a victory or defeat, that been said, it is still a card game with fun.

Lian Huan Ma as in Chinese is 连环马, in English is chained horses, it is originally a trick that had been used in ancient battlefield of China which links battle steeds with iron chains row by row and rush ahead right into enemies. And also it is a strategy emerges in the Chinese chess which two horses fight together and protect each other. So this name also is applied in one Chinese card game, in this case, it means 3 cards with same value and also can be a sequence of 3 cards in order, that is how the name of this game comes from, and also the basic playing guidance of this card game.

With the increase of shared cards, someone may get lucky to be able to finish all his cards first, then he is the winner. What if the game runs out of deck on the table and no one can claim no cards left, then the one who got most horses win out.

The name of this card game indicates the need of long time playing for every round, not stands for how it plays.

Marathon card game need a deck of 52 cards without jokers, and is game of suit relevant. The order of the cards are as the numbers on them, ace is the biggest. It’s participating game for at least two players, and if run out of cards, it’s fine to add more. The same winning condition with same other games, like lying, among all the players, anyone who discard all cards will be the winner.

Since I haven’t played this game before, so I don’t really know how long it will take to play each game. But I think the collecting cards punishment mechanism may fair enough to gain some playing time every round, and if I am a winner, I must be boring to wait for the others to finish the Marathon.

Bei Si Mao(憋死猫), rough translation as “Stifle The Cat”. So far as I know, this game is played at Beijing and Xuzhou. This is a matching card game, suit related and values do not(however they decide who play the first hand by got the highest value, and if that are more than 2 players, then suits come in the order of spade > heart > club > diamond), you play it by the same suit with last card, but you have the ability to change the suit type if you get the same value of last card.

Suitable for 2-5 players with one deck of 52 cards, no jokers.

If you decide to stop, then the one who gets highest values lost the game, or set a losing point, say 100. And here ace is one point.